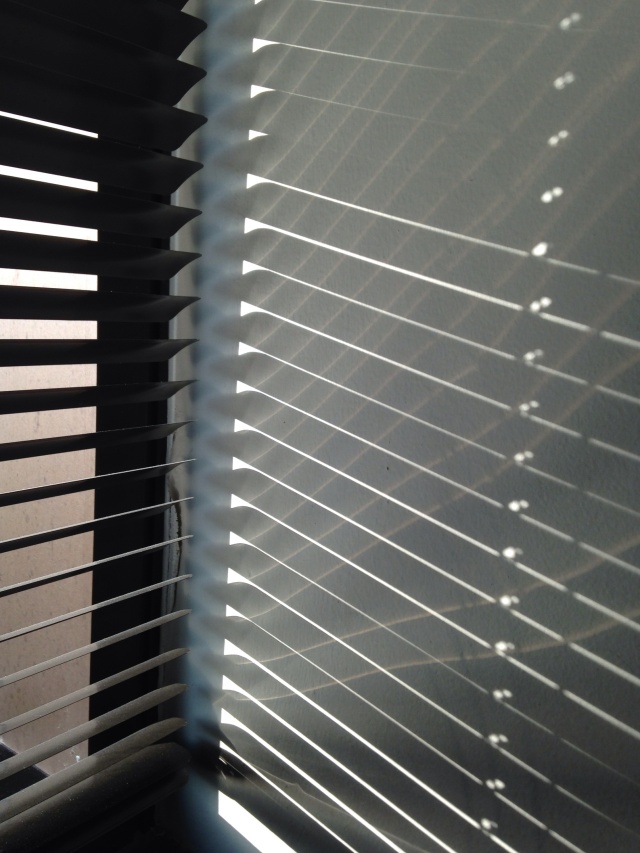 Bright sunshine today for the first time in maybe a week. Had to pull down the blinds in my office . . . at which point I noticed another “perspective”-type convergence of lines similar (vaguely) to my post last Friday, “Perspective.”

“Perspective” is one of my favorite visual concepts.  Here are two images I’m particularly fond of in film.  The first film still is from Alfred Hitchcock’s Marnie (1964).

I wrote about this sequence in a post a couple of years ago, so I won’t repeat myself.  If you’d like to read my thoughts on how Hitchcock marries form and content through the use of perspective in Marnie’s opening sequence, you can read that post, “Perspectives on depth perception as metaphor in film,” here.

The second still is from The Dark Knight (2008).  It has been a few years since I watched this movie, so I can’t remember seeing this shot or where it comes in the film.  But I’ve seen this photo so many times that it has taken on its own significance for me. The vanishing point is obviously somewhere behind the Joker.  So a few thoughts here.  First, the use of perspective uses the two planes of office buildings to sweep the viewer’s gaze down the street to where the Joker is waiting for us.  The Joker’s stillness contrasts with our involuntary  movement toward him.  Second, the Joker appears to have emerged from the darkness at the center, like the evil thing that he is.  And third, the Joker is standing between us and the horizon.  We’re not going anywhere because he won’t let us.  We’re trapped and facing an ominous doom.

In art, the concept of “perspective” got its start during the Italian Renaissance.  Its invention is generally attributed to Italian architect (artist, sculptor, artisan-engineer) Filippo Di Ser Brunelleschi (1377-1446), the man behind the dome at The Basilica di Santa Maria del Fiore in Florence, an incredibly brilliant engineering marvel.  (More on that another time, maybe.  If you’d like to learn more, here’s the Wikipedia article about him, which has more detail.) So what Brunelleschi did was realize that you could create a three-dimensional effect on a two-dimensional surface by using one or more “vanishing points” and having lines converge on those.  In Brunelleschi ‘s case, he figured out how to draw perspective in art using science.  The concept of “perspective” is derived from both disciplines. The term “Renaissance man” is generally used to describe a person who is accomplished in many areas.  It comes from men like Brunelleschi and, of course, Leonardo da Vinci—men who lived during the Renaissance and were widely accomplished in the arts and sciences. Once you take a longer, wider view of knowledge, you realize there really are very few significant divides among disciplines.

Maybe that’s why the idea of “perspective” captures my imagination, both the art term and the concepts generated by the broader definition of the word itself.  “Perspective” comes from the following roots (courtesy of Wiktionary):

I especially like that “prospect”/”possibility” connection, in the way the word “perspective” brings together the idea of both sight and thought.  Sometimes a change of scenery can prompt a whole new outlook.