Great Books: The Devil in the White City

Last night was my Great Books Dinner and Discussion event at Milwaukee School of Engineering.  I usually facilitate a book discussion every June, and lately I’ve added the November discussion to my rotation, as well.  This month’s selection was The Devil in the White City, by Erik Larson. 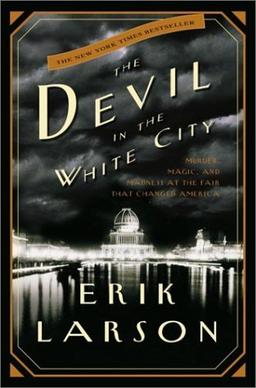 Although thunder and lightening sent sheets of wind-driven rain onto the street outside the comfortable rooms of MSOE’s Alumni Partnership Center, we hardly gave the weather any notice at all inside the sturdy stone walls.  Our Great Books events are held in the former headquarters of the Blatz Brewing Co. business offices, featuring hardwood floors, high oak-beamed ceilings, hand-carved fireplaces, marble hearths, and a two-story skylight.  A walk-in vault/safe serves as the coat closet, which is fun.  A steep ladder/staircase leads to a second vault above it.

MSOE has been running the Great Books series since 1996, the same year Oprah started her book club, in fact.  It is an enjoyable evening out, a lot like book club except no one has to clean their house and you actually do talk about the book 🙂  The registration fee of $50 covers hors d’oeuvres, wine or soda (“pop” where I’m from; “soda” in the Milwaukee vernacular), dinner, dessert, coffee—and, of course, conversation about the selected book.

People come with friends, or they come alone and make new friends over dinner.  Some people have developed friendships outside of the monthly event after attending over time and seeing each other there.  People also attend with their regular book clubs, sometimes adding our evening to their normal meeting schedule if the book we’re discussing looks good to them.  And we are getting more men at the events, whether alone or as part of a couple, which is nice to see.

I really do enjoy these evenings, even though as the discussion leader I’m technically working.

Last night in addition to our usual conversation about the book, I shared some interesting videos I’d found on YouTube about the “White City.”  I really hadn’t known much of anything regarding the 1893 World’s Columbian Exposition before reading Erik Larson’s book, so I supplemented what I’d learned from Larson with some background research.  If you haven’t yet read The Devil in the White City, you should. It’s fascinating.  And your jaw will drop in delight . . . repeatedly . . . as Larson slips yet another famous name, amazing tidbit of information, or astonishing twist of fate into his narrative.  Really a fun book—dense but readable.  And one that rewards repeated reading.

My only complaint is that Larson’s book contains disappointingly few photographs of the fair.  Each new section (but not every chapter) contains a small photograph that provides a tantalizing glimpse of how magical the fairgrounds were.  It’s not enough, though.  I found several photos online, and you really do need to see all the pictures for yourself to appreciate how awesome (in the original sense of the word) the “White City” truly was.  The enormous scale of the architecture and landscaped grounds absolutely floors me.  (Now that I think of it, Larson’s book is so packed with detail already that he couldn’t possibly have included all the photographs I wanted him to 🙂 )

More than 27 million people attended the fair during its six-month run.  Yet because most photos of the fairgrounds were taken prior to the official opening, they contain almost no people, just a few random men in suits standing around the massive structures and landscapes.

Surprisingly few pictures show the “White City” actually crowded with people—as it must have been to have racked up those 27 million visitors.  On its single busiest day, in fact,  more than 700,000 people crowded into the fairgrounds.

One primary preoccupation of the fair’s planners was that their event should have an attraction that could “out-Eiffel” Eiffel, a reference to the Eiffel Tower (and engineer Gustave Eiffel, its designer), that had been built as the entrance arch for the 1889 World’s Fair in Paris.

The enormous “Chicago Wheel,” or Ferris Wheel, was the hit of the fair.

And it was HUGE!  Each of its 36 cars (the size of railroad boxcars) held 60 people, meaning that the wheel could hold 2,160 people at one time.  Compare that capacity with two of the world’s newest Ferris wheels, the London Eye (800 people) or the Singapore Flyer (784 people).

As the photograph below shows, the Ferris Wheel dominated its location on the Midway Plaisance, a mile-long stretch of green Chicago park jutting inland from Jackson Park (and from which came the term “midway,” referring to the section of a fairground devoted to rides and games).

Here’s a view from inside one of the cars.

Cool, right?  According to Wikipedia, 38,000 people a day rode the Ferris Wheel during the fair’s run.

But back to the book.  The Devil in the White City tells the stories of two very different, yet similar, blue-eyed men.

The first, Daniel Burnham, is Director of Works for the fair.  Without his ambition and drive the fairground’s development probably would not have happened.  He not only pulled together America’s top building and landscape architects (a task similar to “herding cats”) but also managed to build a fantasy city of enchantment on an impossibly tight deadline.  He really did build a city, too.  The White City had its own police force and fire protection, etc.

The second man, H.H. Holmes, is a serial killer who operated in the shadow of the fair, murdering possibly as many as 200 people at his gloomy “Castle” at Sixty-third and Wallace, about two miles due west of the fairgrounds.  As repulsed as you may be by his crimes, you can’t help but be at the same time fascinated by his smoothly confident, entrepreneurial brand of evil.  Leonardo DiCaprio purchased the film rights to The Devil in the White City in 2010.  I wish he’d play the good guy, Daniel Burnham, but I’m sure he’s going to make a fabulous villain of Holmes.

The Devil in the White City also tells the stories of two very different, yet similar, cities: Chicago (crowded, dirty, and hazy with coal smoke) and the White City (spacious, sunny, beautiful, and cooled by clear breezes from Lake Michigan).  Interestingly, these cities become characters as distinct as Burnham and Holmes.

Here are links, etc., to a few of the more interesting sources I found in preparing for the book discussion. If you are curious to learn more about the 1893 World’s Columbian Exposition, I think you’ll enjoy them!

(UPDATE: Because someone visited this post today, Friday, December 17, 2021, and I haven’t thought about it in a long time, I popped in to revisit it myself–and found that several photos I’d linked to in the original post are no longer live. I’ll try to find them again in the next few days, or at least substitute photos that equally illustrate the points I was making in each case. Just FYI, in case you are here reading this post again today or tomorrow❤️)

I am a college professor at Milwaukee School of Engineering, where I teach literature, film studies, political science, and communication. I also volunteer with a Milwaukee homeless sanctuary, Repairers of the Breach, as chair of the Communications and Fund Development Committee.
View all posts by Katherine Wikoff →
This entry was posted in Books and reading, History, WPLongform (posts of 1000 words or longer) and tagged "The Devil in the White City", 1893 World's Columbian Exposition, architecture, arts, book club, Chicago World's Fair, Daniel Burnham, Erik Larson, Great Books, H.H. Holmes, Milwaukee School of Engineering, MSOE, The White City, WPLongform. Bookmark the permalink.

13 Responses to Great Books: The Devil in the White City