Posted on February 27, 2018 by Katherine Wikoff

Days like this I wish I had a better camera. Or maybe I should say: I wish I had a better phone, because I actually do have a better(ish) camera at home that is never handy for spur-of-the-moment shots. Here I really liked the high contrast between shadow and brightness on the Red Arrow granite memorial. I tried to capture those dark and light surfaces today but didn’t quite succeed. 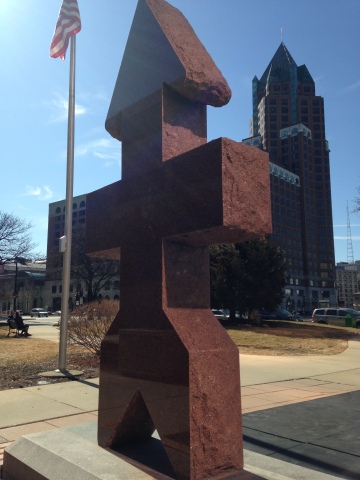 It was so sunny that I couldn’t even really see what my pictures looked like on my phone until I got inside and could view them out of the direct sunlight. Although disappointed that the image I’d been trying to create eluded me, I did like the rays of sunshine that showed up in my final attempt.

Also, check out the bystander’s reflection in the photo below. 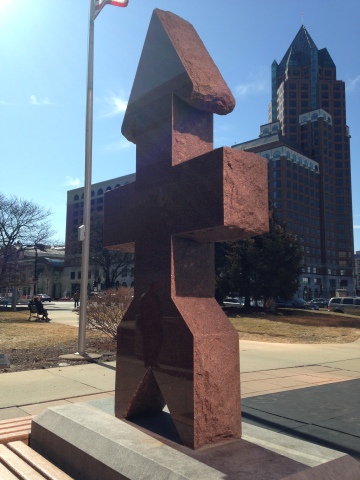 To me that reflection suggests a murder-mystery scenario similar to Blow-Up, where a photographer takes a picture and accidentally records what may have been a murder. Have you seen that film? Or the John Travolta movie called Blow Out with the same general premise except that he’s a sound guy working on a low-budget film who accidentally captures audio evidence of an assassination? The trailers for both movies are below, along with the “blow up” scene from Blow-Up, because you’d never guess from the trailer’s scenes of swinging “mod” London that Blow-Up‘s title has anything to do with photo enlargement   🙂

I am a college professor at Milwaukee School of Engineering, where I teach literature, film studies, political science, and communication. I also volunteer with a Milwaukee homeless sanctuary, Repairers of the Breach, as chair of the Communications and Fund Development Committee.
View all posts by Katherine Wikoff →
This entry was posted in Life, Milwaukee, Movies and film, Popular culture and tagged Blow Out, Blow-Up, Milwaukee, Red Arrow Park. Bookmark the permalink.