Posted on December 26, 2020 by Katherine Wikoff

This week’s writing exercise is another one from Ursula K. Le Guin’s marvelous book on writing, Steering the Craft: A Twenty-First-Century Guide to Sailing the Sea of Story (Amazon link HERE, in case you’re interested in checking it out).

Our writing group’s members take turns creating the prompts for our bi-weekly meetings. This one came from Jo, who took it from pp. 8-9 in Le Guin’s book. And, actually, the title of today’s blog post comes from the title Jo gave to her exercise: “Being Gorgeous.”

BEING GORGEOUS
SUGGESTED PROMPTS:
• Climax of a ghost story OR
• Invent an island and start walking across it

Part One: Write a paragraph or a page meant to be read aloud. Use onomatopoeia (I had to look this up), alliteration, repetition, rhythmic effects, made-up words or names, dialect—any kind of sound effect you like, but not rhyme or meter.

Part Two: In a paragraph or so, describe an action or a person feeling strong emotion—joy, fear, grief. Try to make the rhythm of the language embody or represent the physical reality you’re writing about.

NOTE: LeGuin doesn’t say the 2 parts need to be connected so Part 2 could be separate or a continuation. She does say: Write for pleasure/play. Focus on the ‘sound’ of the writing.

I decided to mash up all the exercise criteria together to write a ghost story on an island, with a focus on words having an “s” sound. After a slow start, this exercise became a lot of fun. Every time I found myself pausing to think of the next word in a sentence, I deliberately sought anything even slightly related to the topic that started with an “s” or contained an “s” sound. Those “s” words led me in new directions, opening story possibilities I’d never have found otherwise. And the longer I wrote, the faster those “s” words flowed. It was like a long chain of torches being lit to illuminate my ever-accelerating passage. I realize this description makes my writing process sound way more exciting than it was, but my point is, it was fun to surrender to language and sound as my guide instead of relying on more logical thought patterns.

For subject matter I chose the fictional Appalachian Ohio River town of Adell Ferry, which is the setting for my mystery novel I’ve been writing forever and—who knows?😊—may actually someday publish. For now it’s a fun hobby, quite different from the writing I ordinarily do for work, or even for this blog. Fiction is super challenging for me because it doesn’t come naturally at all. Although I used to write short essays in response to our writing-group prompts, lately I’ve tried to push myself to write fiction. I’ve also given several writing-group exercises an Adell Ferry setting. My novel is contemporary, but my exercises so far have assumed vaguely historical eras (1930s, 1970s, etc.) which seems to help me develop a feeling for the place without being overly distracted by characters or plot. Not that it particularly matters for this exercise, but I picture Adell Ferry being somewhere on the Ohio River not terribly far upriver from Huntington, West Virginia. You know how Ohio comes to a point at the bottom? 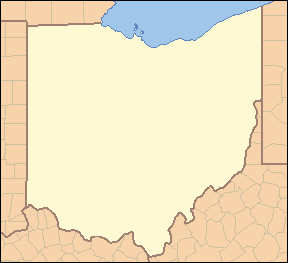 Well, Adell Ferry would be somewhere along the Ohio River on the righthand side between the southern tip and maybe halfway to the Pennsylvania border.

Because Adell Ferry is fictional, don’t bother looking at a map trying to find where there’s a decent-sized island near the southern tip of the state. I sort of based my island on Blennerhassett Island, which is near Marietta, Ohio, and Parkersburg, West Virginia, about halfway between the southern tip and the Pennsylvania border and thus at the farthest-upriver end of my Adell Ferry stretch of the river. Blennerhassett Island is famous (infamous) for its association with the “Burr Conspiracy,” Aaron Burr’s alleged, treasonous plan to take over part (or even all?) of the Louisiana Territory in 1805-06. Although the Ohio River doesn’t have many habitable islands, Blennerhassett Island demonstrates that there’s at least one island large enough to hold not only a house but also a treasonous military training facility 😊

Thus establishing the plausibility of my fictional island, which need not be anywhere near the size of Blennerhassett. Just large enough for brush and trees to hide a small campfire and also large enough that “walking across it,” as specified in the exercise (remember that? the exercise that was the whole point of this post before all my Adell Ferry meandering?), would take enough time for a scene to happen.

So here is my ghost story about walking across an invented island, written with alliterative “s” sounds. First, the disclaimer: This is a work of fiction. Names, characters, businesses, places, events, locales, and incidents are either the products of the author’s imagination or used in a fictitious manner. Any resemblance to actual persons, living or dead, or actual events is purely coincidental.

And now, my exercise.

Hogsfort Island is a shifting sandbar in the Ohio River, unnaturally large for the tenuous thing it is. Centuries of flooding slowly set down sediment atop the gravel and sand, allowing first grass and later trees to sprout.

Tonight scrub trees resembling willows and twisted elms bend low, their shapes casting sinister shadows on the smooth water flowing past and shielding the interior from view. The moon is a silvery crescent. Its piercing light slices black, cloudless sky. Our oars slip neatly into the water, nearly soundless small, rhythmic splashes. The island rises suddenly, looms over us like a gothic cathedral or a haunted castle. Awesome. Terrible.

Bobby Swain has been here before, knows how to slant the rowboat to swing with the current, and soon we slide into a sheltered cove. My shoes sink into soggy sand and clay as I follow Bobby into the brush, but the ground soon stabilizes. Branches scratch my arms, snag my sweater sleeves, snatch at my hair. Darkness surrounds us as we move deeper into the island. A silent scream swirls inside my chest, a secret I might be able to keep except for the sharp, thin threads escaping with every exhalation.

We saw a light on the island last week from our secret hideout on Orchard Hill. Bobby is certain these are the ghosts who’ve been stealing into town and spiriting away all the missing pets. Bobby has his stepfather’s shotgun, and I, following blindly behind as usual, have nothing, not even the sense God gave me.

A twig snaps—behind me? I try to make out Bobby’s shaggy hair in the darkness ahead. Is he there? Am I lost?

“Swain!” I hiss. And grunt my surprise as I run right into his solid body.

“Shut it,” he hisses back. He shifts the gun to his other hand, then puts an arm around my shoulders. At first I think he’s protecting me, but then I realize he’s scared, too.

His arm tightens, and he slowly turns us as a single unit . . . but not back toward the boat. My throat squeezes shut as I see what he wants me to understand. Through the trees a small campfire flickers.

And so are we. 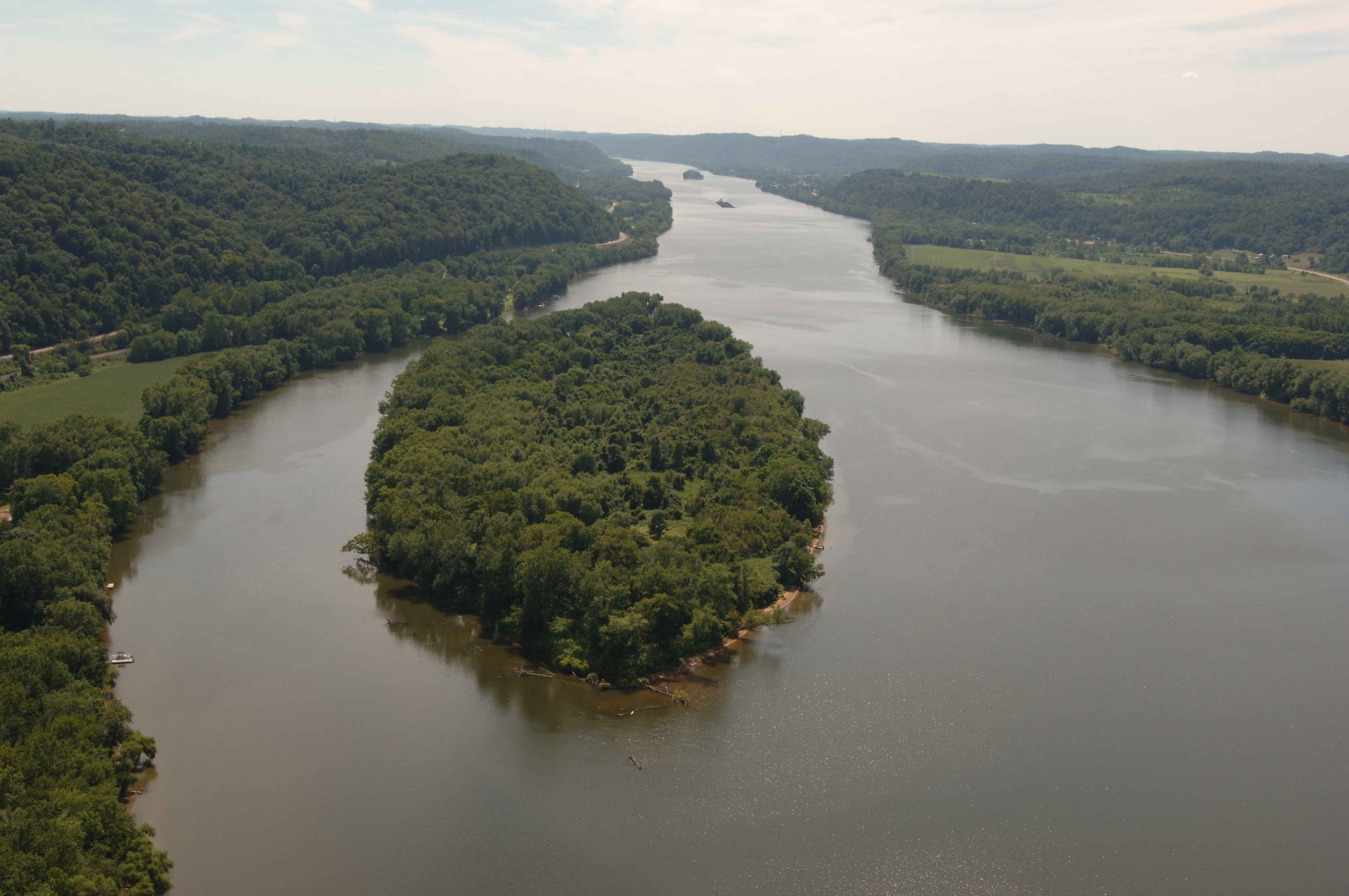 I am a college professor at Milwaukee School of Engineering, where I teach literature, film studies, political science, and communication. I also volunteer with a Milwaukee homeless sanctuary, Repairers of the Breach, as chair of the Communications and Fund Development Committee.
View all posts by Katherine Wikoff →
This entry was posted in Creativity, Writing, blogging and tagged "Steering the Craft" writing exercise, ohio river, writing exercises. Bookmark the permalink.