Posted on November 23, 2021 by Katherine Wikoff

So begins one of my favorite songs, and it popped into my head this morning as soon as I realized that today was “Fibonacci Day.”

And what is Fibonacci, you may wonder? Or maybe not 🙂

It’s a number, sort of. Only better! A Fibonacci number is actually a sequence of numbers in which each individual number is the sum of the two preceding numbers (starting from 0 and 1). Wikipedia article HERE.

Check out this visualization of the Fibonacci number sequence here. Each square contains an array equaling the square of the number displayed. 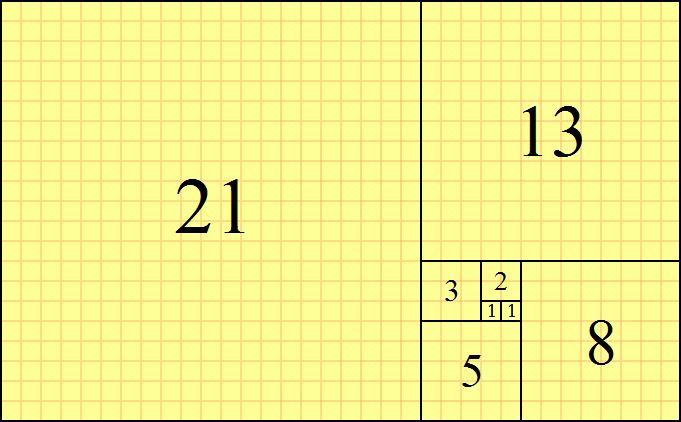 This is the spiral that shows up in nature so many times, via seashells, sunflower heads (seeds), pinecones, etc. It’s also the basis of the “Golden Ratio” (Wikipedia article HERE) that characterizes classical art and architecture.

How do I know these things? Well, Walt Disney, of course! And his wonderful 1959 animated movie short Donald in Mathmagic Land. (You can also search for and view it on YouTube if the link below doesn’t work.)

The section talking about the “Golden Ratio” runs from about 2:45-13:40. But I recommend starting from the beginning. I was hooked from the moment Donald the explorer observed that all the trees in this strange new world had “square roots.”

Anyway, when I realized that today was Fibonacci Day, I thought about “Windmills of Your Mind” (Wikipedia HERE). This was the song from the title sequence of one of my favorite movies, The Thomas Crown Affair (the original 1968 film starring Steve McQueen and Faye Dunaway, Wikipedia article HERE), sung by Noel Harrison (son of Rex! today’s trivia 🙂 ).

Since thinking about the song put me in mind of that fabulous title sequence, I went and looked it up so I could waste two minutes enjoying it.

Even though I remembered that the title sequence is a fragmented collection of rectangles, I never realized till TODAY (Fibonacci Day 🙂 ) that it is inspired by the Fibonacci “Golden Spiral” (Wikipedia HERE).

The fragmented-screen style continues (after the opening scene of the getaway driver’s job interview) with all the bank robbers (dressed in hip 1960s Mad Men “disguises,” complete with straw fedoras and Ray-Ban sunglasses) getting set into motion (via Crown’s one-word command to “Go.”) from their myriad locations of origin to converge on the scene of the heist for this one moment in time and this one moment only.

The perfect crime! One that can be solved only by the super-genius, fashion-forward, heavily hairstyled and eyelashed insurance investigator extraordinaire, Vicki Anderson.

Hmmm, I don’t see a clip of the actual bank robber online, which is too bad. It’s one of my favorite movie scenes. But fortunately I own this movie, so I think perhaps I’ll celebrate Fibonacci Day by watching it tonight.

The 1968 film is worth seeking out if you’re ever searching for something new to watch. Very stylish in a self-consciously hip late-’60s sort of way, and much better (imo) than the 1999 remake, although I do love the Magritte bowler-hat returning-the-stolen-painting scene’s homage to the 1968 bank-robbery scene. Plus, the 1999 version does have a (spoiler!) happy ending, which, given the era’s nihilistic tendencies, the 1968 version (spoiler!) does not.

I am a college professor at Milwaukee School of Engineering, where I teach literature, film studies, political science, and communication. I also volunteer with a Milwaukee homeless sanctuary, Repairers of the Breach, as chair of the Communications and Fund Development Committee.
View all posts by Katherine Wikoff →
This entry was posted in architecture, Art, Creativity, Life, Movies and film, Nature, Science and tagged Fibonacci Day, Fibonacci number, Fibonacci spiral, golden ratio, golden spiral, thomas crown affair. Bookmark the permalink.