Posted on November 9, 2013 by Katherine Wikoff

Yesterday marked the 100th year that the City of Milwaukee has placed a pine tree downtown during the holiday season.  Our longstanding tradition is supposedly second to New York City, but the first tree was not erected at Rockefeller Center until 1931 (unofficially, by the construction workers who were building it, with the first official tree erected two years later in 1933).

Traditionally our tree was installed at Milwaukee’s City Hall.  I remember seeing large, decorated trees near the front entrance arches years ago in the 1980s.  But since construction of the ice rink at Red Arrow Park one block north of City Hall, the tree has been placed there instead.

Yesterday I watched this year’s tree get cut down on television around 6:30 a.m.  Then around ten o’clock I walked over to Starbucks for coffee and a meeting.  By then crews were setting the tree into place beside the not-yet-ice-coated skating rink.  (One nice “extra” associated with teaching at Milwaukee School of Engineering is the opportunity to work downtown and be in the center of city happenings 🙂 ) 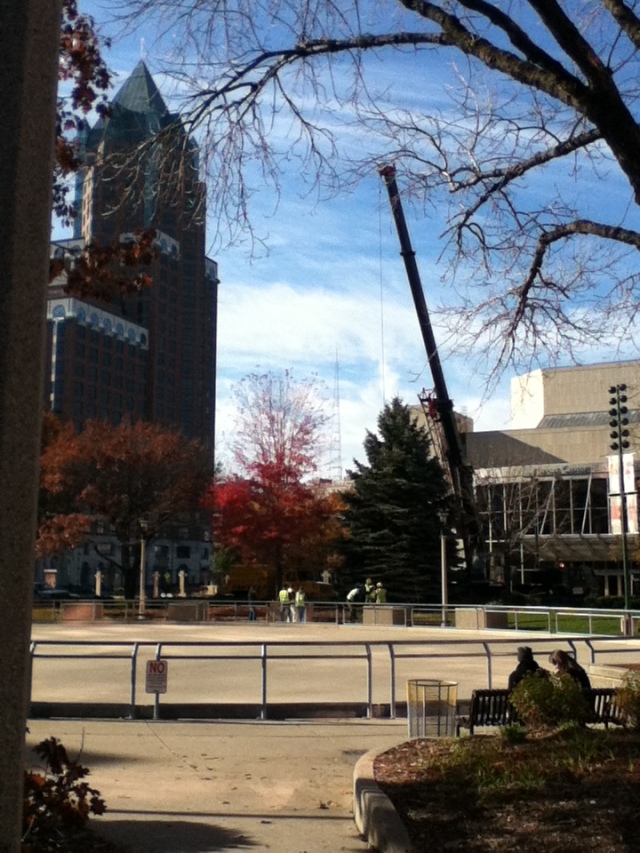 The city tree is always harvested from a yard somewhere in the metropolitan area.  This year’s tree is a 40-foot Colorado blue spruce donated by the Loving Shepherd Lutheran Church at 39th and Clinton.  It was hoisted from its trunk and driven slowly downtown on a flatbed with a police escort.

Here is video of yesterday’s tree harvest from WTMJ (Channel 4):