In an Earlier Era of “Walkable Cities”

If you take a close look at some of Milwaukee’s older neighborhoods, you’ll notice that a hundred years ago (approximately, say, 1870-1930) factories were surrounded not only by the modest cottages of workers but also by the mansions of the owners. Today you’d be lucky to find an owner living in the same metropolitan area as the factory, much less somewhere inside the United States.

The university where I teach, Milwaukee School of Engineering, sits on the site of the former Blatz Brewing Co., and in fact, several buildings on our campus were once part of the Blatz complex. So I’ve taken a casual interest in learning more about Blatz’s history, especially as it relates to our own buildings.

Not long ago, I stumbled across a photograph of the mansion Valentin Blatz built within just a few blocks of his company. Beautiful!

(Aside: the historic photos of the Blatz mansion in this post are from the Historic Photo Collection, F.P. Zeidler Humanities Room, Milwaukee Public Library, and are used with with permission.)

Described as a three-story stone mansion that was a blend of Queen Anne, Romanesque, and Gothic styles, the residence was designed by architect Charles A. Gombert and was home to Valentin Blatz from 1884, the year it was built, until his death in 1894. 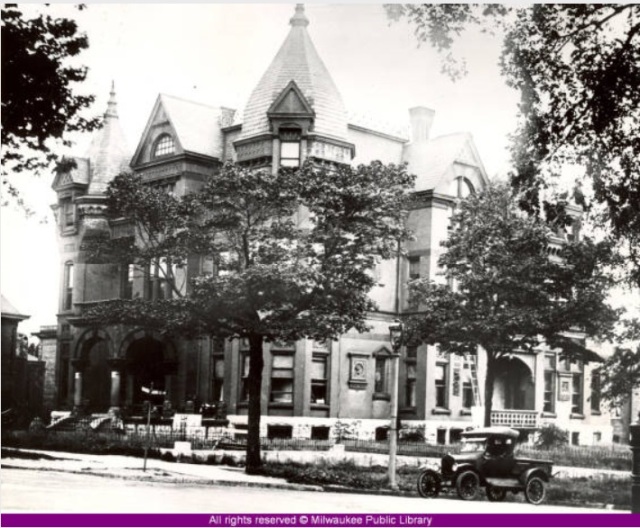 Blatz mansion photograph taken from an August 9, 1964, newspaper article. Originally captioned: “The old Victorian mansion of Valentin Blatz, Sr., is shown as it appeared in the 1920’s. The pioneer brewer’s structure was razed last week along with an old coach house that stood behind it. “

I’ve seen this phenomenon repeated across the older neighborhoods of Milwaukee. As recently as the 1930s neighborhoods appear to have been developed with walkability in mind. Factories and retail businesses lined the main streets, and residential housing filled in the blocks in between. It’s so intriguing to think about factory owners walking home from their places of business, perhaps greeting workers and their families along the way, who would also have been able to walk to work. What a different kind of community that must have created!

Just to make sure I wasn’t extrapolating too much—that is, building up a theory of historical lifestyle based on the evidence of abandoned/repurposed factory buildings, bowling alleys, banks, and retail shops—I did some quick online research looking for info that would support my mental image of life in those neighborhoods a hundred years ago. And found this, for example. 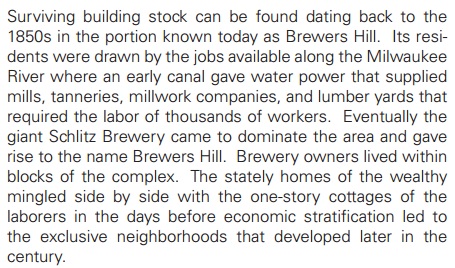 Taken from the City of Milwaukee’s Northeast Side Comprehensive Plan, July 21, 2009 (page 30)

I also found some rather sad information about the home of Valentin Blatz, Jr., whose mansion was located a few blocks east and slightly north of his father’s, among the mansions that once lined Prospect Avenue above the shore of Lake Michigan.

Which then led me to this 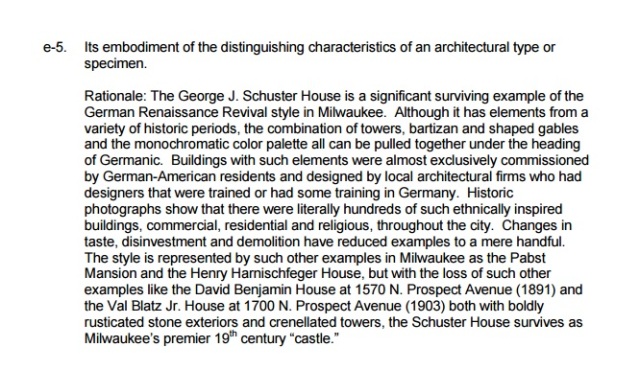 Which led, at last, to a little good news on the historic preservation front. I didn’t recognize the “Redstone Apartments” name indicated as the Schuster House’s alias as of the time of this undated report. But when I Googled “Schuster House” and the address indicated, I found this! 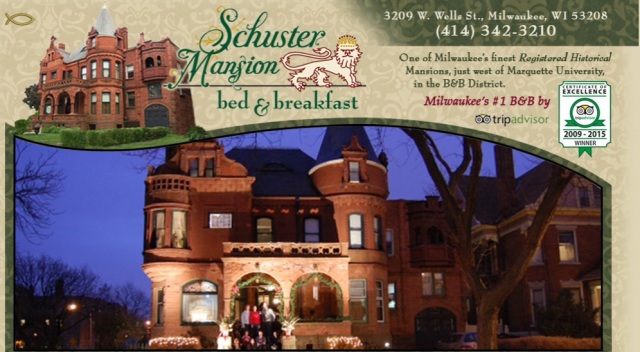 The Schuster House has found new life, and you can stay there next time you visit Milwaukee!

Sadly, turning to the fate of the original Valentin Blatz, Sr., mansion, Milwaukee’s downtown area became a rather downscale place to live during the mid-20th century. By 1939, as noted in the article above, his son’s mansion had become a target for vandals. The old Blatz, Sr., mansion was divided up into rooming-house units, and eventually a storefront addition replaced its front and side yards. 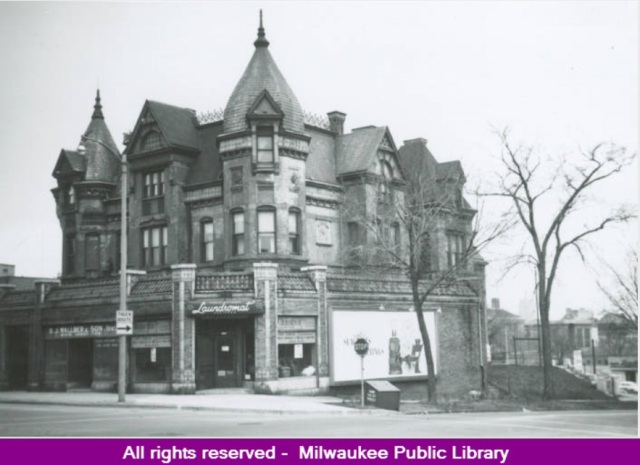 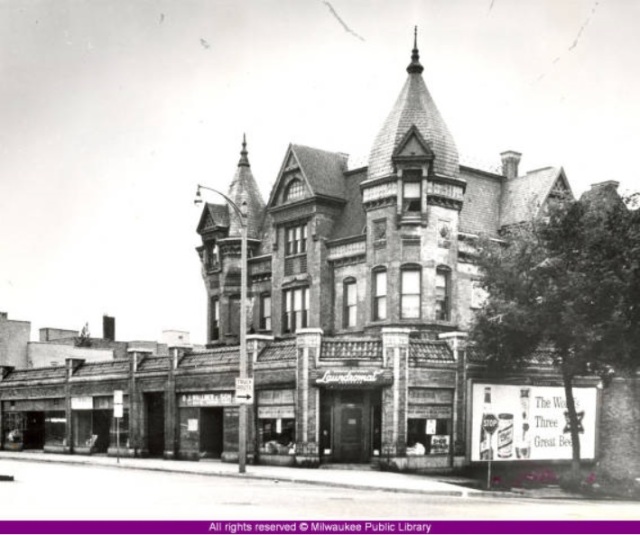 Finally, as happened all too often with older architecture in 1960s urban America, the former mansion was demolished in August 1964. To be replaced by . . .

Those familiar with downtown Milwaukee will recognize the exact site of the Valentin Blatz mansion, at the southwest corner of Van Buren and Juneau. It is now the parking structure for Metro Market, a popular (and quite upscale) downtown grocery. 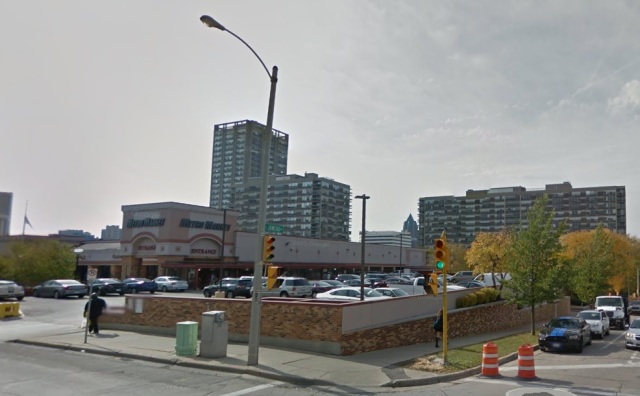 This seems like an appropriate time to cite one of the most haunting poems I know, “Ozymandias,” by Percy Bysshe Shelley:

I met a traveller from an antique land
Who said: “Two vast and trunkless legs of stone
Stand in the desert. Near them, on the sand,
Half sunk, a shattered visage lies, whose frown,
And wrinkled lip, and sneer of cold command,
Tell that its sculptor well those passions read
Which yet survive, stamped on these lifeless things,
The hand that mocked them and the heart that fed:
And on the pedestal these words appear:
‘My name is Ozymandias, king of kings:
Look on my works, ye Mighty, and despair!’
Nothing beside remains. Round the decay
Of that colossal wreck, boundless and bare
The lone and level sands stretch far away.”

Gee, wildebeests at the watering hole two days ago and now this today. I’m sure I’ll post something happier next time 🙂