Progress on the new Milwaukee Bucks arena (official name: Wisconsin Entertainment and Sports Center, or WESC, Wikipedia article here) has been slow but steady. Here’s what appears to be an entrance to the complex at the corner of Juneau Avenue and 6th Street.

That sign with the deer logo is really just a series of wires, which you can see in the photo below. 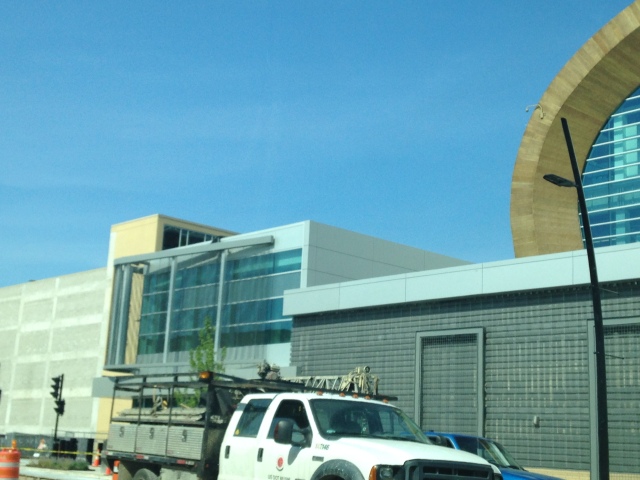 It has been fun to watch this little section of the new arena come together over the past year. Below is that same area before the entrance “annex” was added onto the main building. See the interior staircase? And see the tiny man walking up that staircase? It kind of lets you experience the scale of the building! 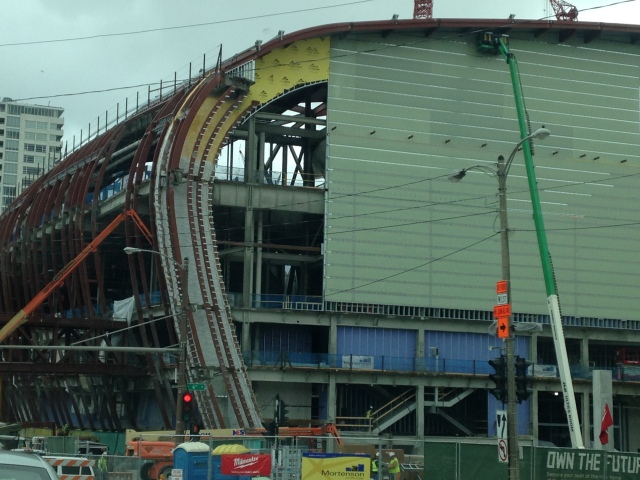 By June of last year they’d pretty much closed up that wall. 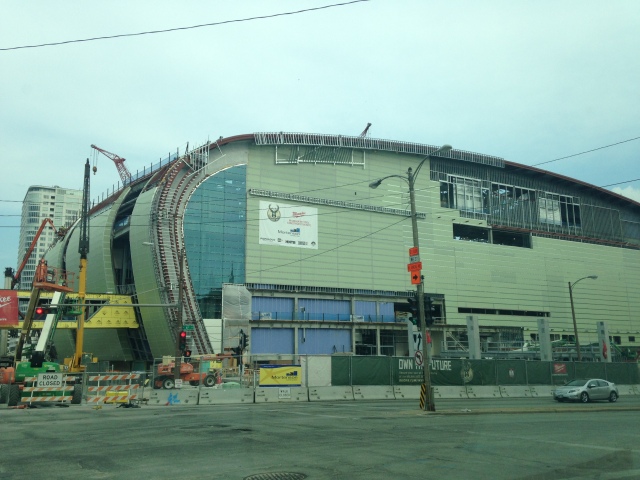 By the end of September last year (2017), they’d built this little “box” attachment. 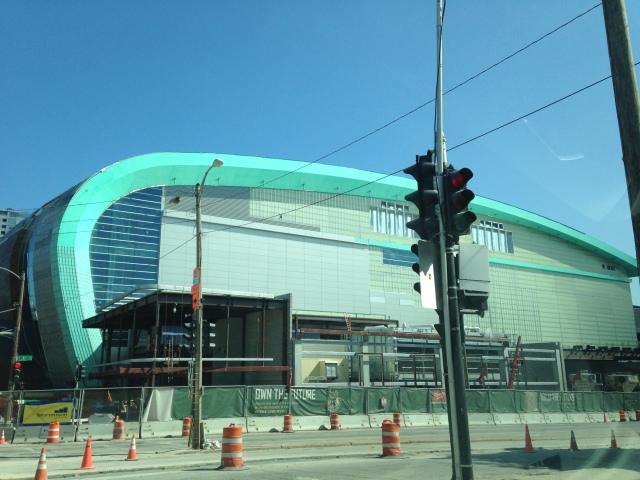 By the end of November they’d hung the white sheets, presumably so they could work inside during the winter. See the little construction workers in their chartreuse jackets up on the roof of this entrance annex?

And finally here are a few photos I took in the last week of the nearly-finished area.

The picture below was taken during the evening rush hour in early May. The cars are going north on 6th Street, and I’m sitting on Highland a block south of where I took all the other photos. (They’ve closed Vliet/Winnebago/Juneau, my usual route, to do sewer/utilities work under the street . . . no doubt related to the new arena and sports medicine facility.) You can see the “annex” entrance area at the far left (and far north) end of this photo. The other lower structure appears to be a loading dock, hence the large garage-type doors. They hadn’t even really started building that when I took the photo above last November. 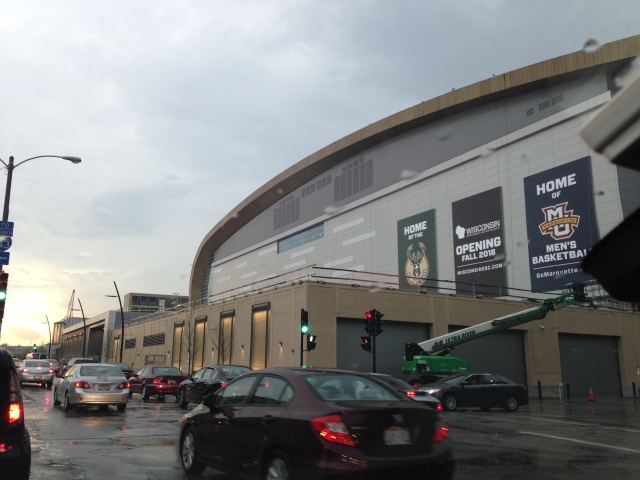 Below is a photo I took two days ago (Wednesday 7/11). Since May they’ve put some kind of brick/tile facade onto the loading dock. This week Wednesday was also the first time I noticed the wire infrastructure that turned out to be the “sign” that carries the deer logo in this post’s first photo. When I first saw it,  in fact, the sign was a weird neon aqua, the whole mass of wires illuminated with the same color. Then the entire mass switched over to red. I tried to grab a picture of the color blocks, but by the time I had my phone ready, it was just plain old wire. And then the traffic light changed and I had to drive on.

So that’s this week’s little update on the new Bucks arena. There is SO MUCH construction happening in Milwaukee right now. We’re a happening place, I guess 🙂

In fact, check out this Vogue magazine article (link here) on “Why Milwaukee Is the Midwest’s Coolest (and Most Underrated) City.” We knew it all along, of course, but it’s nice to get a shout-out when others discover us, too.

I am a college professor at Milwaukee School of Engineering, where I teach literature, film studies, political science, and communication. I also volunteer with a Milwaukee homeless sanctuary, Repairers of the Breach, as chair of the Communications and Fund Development Committee.
View all posts by Katherine Wikoff →
This entry was posted in architecture, Milwaukee, Travel and tagged Downtown Milwaukee, Milwaukee, Milwaukee Bucks arena. Bookmark the permalink.