Posted on September 10, 2019 by Katherine Wikoff

Milwaukee takes its neighborhoods very seriously, to the point of giving them official names (sometimes using the historic default, other times inventing new ones derived from some random but logical connection), drawing up official boundaries, and making up a logo to print on banners that hang on the sides of light poles.

Local historian John Gurda even wrote a book a few years ago titled Milwaukee: City of Neighborhoods. (A quick internet search reveals that other cities also bill themselves as a “city of neighborhoods.” Kind of interesting phrasing, as it seems to state the obvious 🙂 )

So it comes as no surprise that the area of downtown Milwaukee around Fiserv Forum, the Milwaukee Bucks’ newly constructed arena, should get a neighborhood name of its own: the Deer District. I haven’t yet seen any banners proclaiming it as such up on light poles, but the area is still under construction. However, last night I did notice this fire hydrant with the Bucks’ logo. (I know the photo quality is bad; I snapped the picture from my car while stopped at a traffic light.)

Update: I recently passed this fire hydrant again in daylight and saw that the cap on top (orange in the photo) is painted to look like a basketball and has the name “Spalding” painted on it. So talk about BRANDING! I sure hope the city is making a little money from Spalding for that well-placed advertising billboard 😂 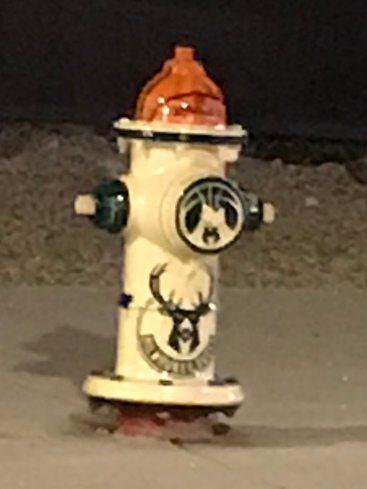 Aside: the next concert scheduled for Fiserv Forum is the Jonas Brothers on September 17. Have you seen their documentary, Chasing Happiness? I watched it earlier this summer with my daughters (who were young enough to hang Jonas Brothers posters on their walls during the trio’s first round of fame). It’s surprisingly good, actually.

I am a college professor at Milwaukee School of Engineering, where I teach literature, film studies, political science, and communication. I also volunteer with a Milwaukee homeless sanctuary, Repairers of the Breach, as chair of the Communications and Fund Development Committee.
View all posts by Katherine Wikoff →
This entry was posted in Creativity, Milwaukee, Popular culture and tagged branding, fire hydrant, Fiserv Forum, John Gurda, Jonas Brothers, Milwaukee. Bookmark the permalink.