Seen walking back from the dentist

It had been raining on the walk over from my office, but the sun was out by the time I left the dentist to start walking back. It’s only about a 15-minute walk, and I like to swing through Red Arrow Park—more specifically, the Red Arrow Starbucks 🙂 —on my way back.

I liked this reflection of City Hall in the glass walls of the new BMO Tower mirrored side by side with the real thing. This image may owe its striking good looks to the rainwashed air and backdrop of gray clouds in contrast with the bright sunlight shining down on the building itself. 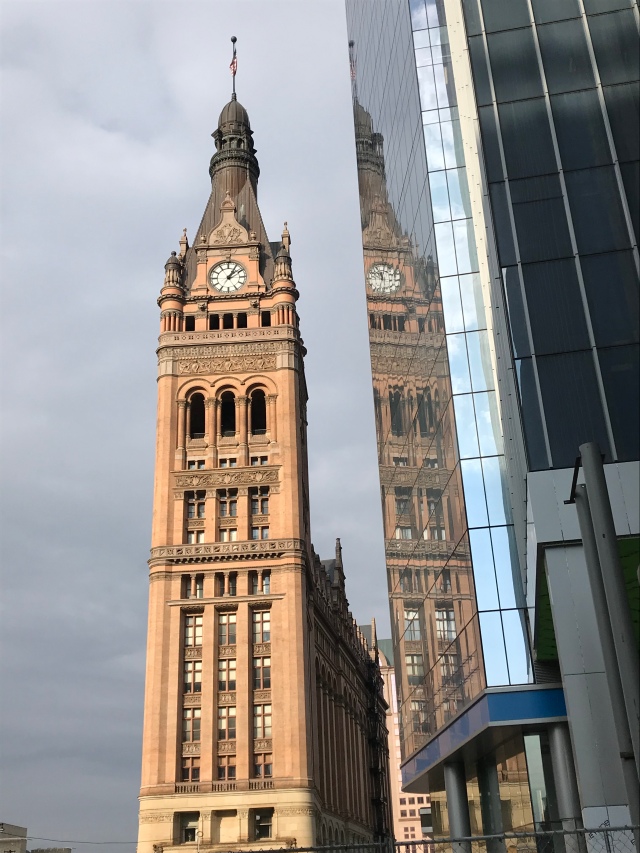 When I got over to Red Arrow Park, I was happy to notice that although the wooden cross and flowers and candle of an unofficial memorial to Dontre Hamilton four years ago had been removed, presumably by county parks workers, the rock itself had been allowed to remain. Dontre Hamilton, an unarmed black Milwaukeean struggling with mental illness, had been sleeping on a bench in Red Arrow Park shortly before he was shot by a police officer. Horrifying and tragic.

Here is what the memorial looked like when I wrote about it four years ago. (You can see my November 2015 post here). 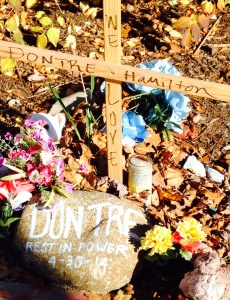 And here is what the rock looked like yesterday. The faint remains of “Dontre” still linger on the surface. 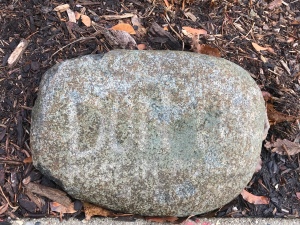 Below you can see the rock in its larger context. That’s it right next to the sidewalk below the bush that has a red-covered planter behind it. 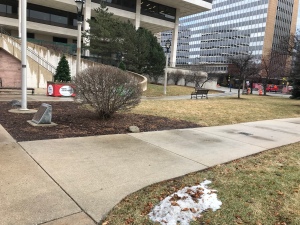 Nice. It’s good to see Dontre Hamilton’s rock there near the other memorial stones and that the county workers left it alone when they removed the rest of the tribute. Very classy move on their part. What happened here needs to be remembered.

I am a college professor at Milwaukee School of Engineering, where I teach literature, film studies, political science, and communication. I also volunteer with a Milwaukee homeless sanctuary, Repairers of the Breach, as chair of the Communications and Fund Development Committee.
View all posts by Katherine Wikoff →
This entry was posted in Milwaukee, Photography and tagged BMO Tower, Dontre Hamilton, Milwaukee, Milwaukee City Hall, Red Arrow Park. Bookmark the permalink.