Posted on December 4, 2012 by Katherine Wikoff 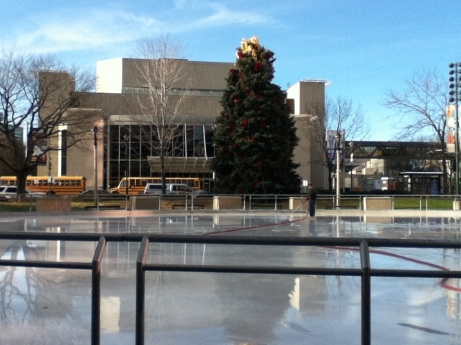 My favorite Starbucks establishment is just a few blocks away from my office, at Red Arrow Park at the corner of Water and State in downtown Milwaukee.  It is the only Starbucks I know of that’s located in a park . . . and the baristas are confident that it’s the only Starbucks in the world with an ice rink.

Red Arrow Park is named after the famous 32nd Infantry Division of the U.S. Army, Les Terribles of World Wars I and II.  The division’s shoulder patch, shown below, depicts a line shot through with an arrow, which signifies how the division pierced the Germans’ Hindenberg Line in World War I.

The division (now inactive) had its origins in the Wisconsin National Guard and the Civil War’s Iron Brigade.  It continued to be made up of units from Wisconsin and Michigan during its incarnation as the 32nd Infantry Division.

I adore my Starbucks all seasons of the year, but especially in winter!  There’s a two-sided fireplace enclosed between glass screens on a stone wall that offers a cozy spot to sip hot chocolate.  Office workers come and go all day getting their coffee pick-me-ups.  College students sit in the armchairs tapping away on their laptops, while business meetings take place at the nearby tables.

And once the ice rink is open, the usual cast of characters is joined by children.  Lots of children, usually on field trips and delivered via school bus.  What energy!

But this year the opening of Red Arrow’s “Slice of Ice” skating rink has been delayed indefinitely by the unseasonably warm weather we’re having this December, according to the park’s official website.  Although the City of Milwaukee’s official Christmas tree is up (shown in the photo above), the ice itself resembles the end-of-season March thaw instead of a crisp sheet of winter surface. 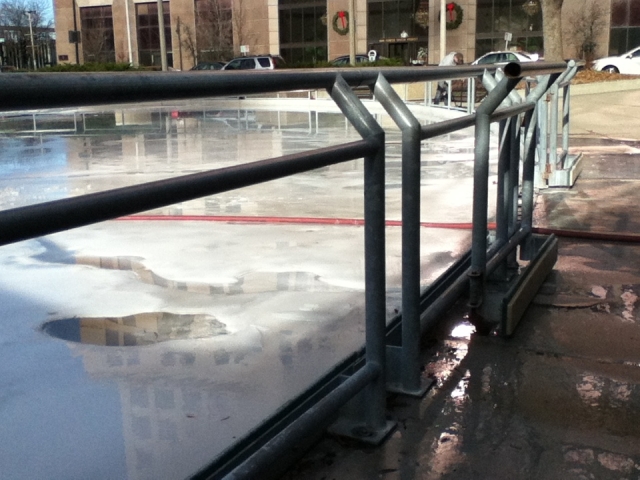 As these photos I snapped today show, the ice isn’t quite right for skating yet. 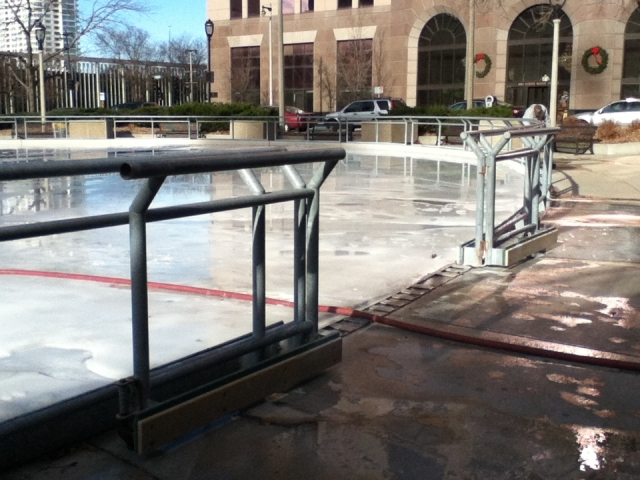